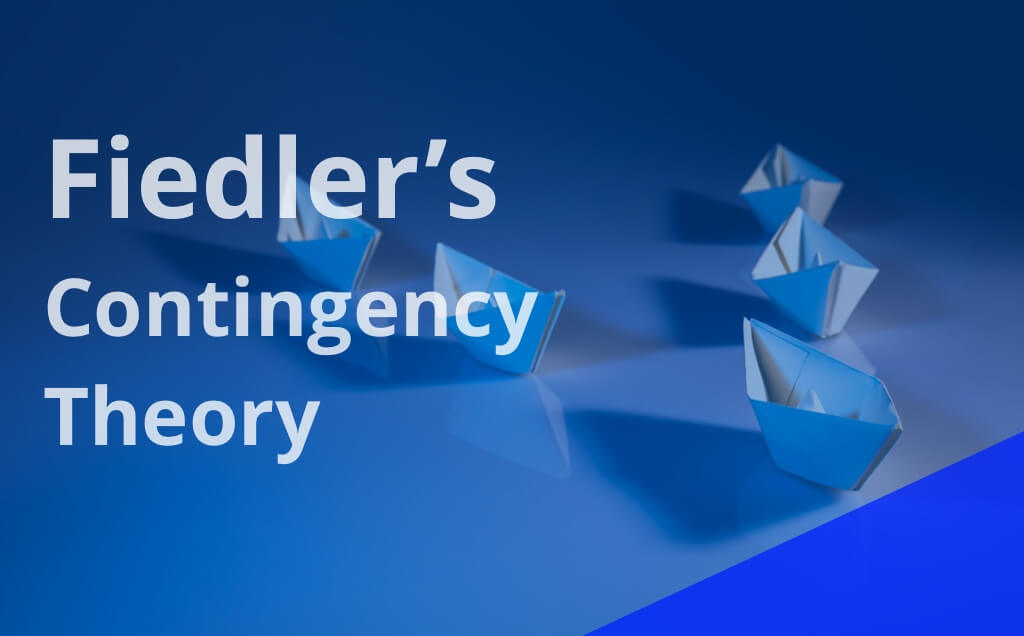 What is Fiedler’s Contingency Theory?

Fiedler’s Contingency Theory is one of the first formalized management theories to demonstrate the importance of selecting leaders based on group goals and dynamics.

While some theories from the early twentieth century like Max Weber’s principles of bureaucracy emphasize standardization and process, Contingency Theory looks closer at how leadership style impacts group relationships and outcomes.

More importantly, the theory outlines exactly how to identify and match leaders and groups. While not commonly referenced in modern workplaces, it’s a key theory underpinning popular leadership training and management systems like DISC popular in Western corporations today.

Who is Fred Fiedler?

Fred Edward Fiedler (1922-2017) was born in Vienna, Austria. Due to his family’s Jewish heritage, he and his family fled Austria in 1937 and settled in South Bend, Indiana. Soon thereafter, Fiedler served for the US Army during World War II.

After the war, he completed two years of clinical psychology training with the Veterans’ Administration and earned his doctorate in Psychology from the University of Chicago in 1949. Next, he spent time working as a professor of Psychology and Education at the University of Illinois.

Then finally, Fiedler became a professor of Psychology and Management and Organization at the University of Washington in Seattle in 1969, staying there for the remainder of his career.

Fiedler’s most prominent work came in 1967 in his publication, “A Theory of Leadership Effectiveness.” He is best known for his work on this subject, including his Contingency Model and the “Least Preferred Coworker (LPC)” scale. As a result of this work, Fiedler has become known as a key contributor to the field of Industrial and Organizational Psychology.1

The way the LPC scale works is a leader is asked to think of their least preferred coworker and rate them on numerous bipolar adjectives. For an example of one adjective, you could select a value between one for “unkind” and eight for “kind” on an eight-point scale of “kindness.”

After the full scale has been completed, the values are totaled to give an LPC score, which is then compared to different ranges to tell the individual their leadership style. The three different leadership styles are:

See below for an example of an LPC scale from the CYFAR Professional Development and Technical Assistance (PDTA) Center. Visit their website to see instructions on how to interpret the LPC score.3

Individuals who have a high LPC score, relationship-oriented leaders, are able to separate the coworker’s personality from poor work performance; that is, they believe someone can perform poorly at work and still have good personality traits. They:

Individuals who have a low LPC score, task-oriented leaders, link a coworker’s personality characteristics to their poor work performance; that is, they believe someone who performs poorly has negative underlying personality traits. They:

Based on these variables, five types of group situations come into existence. They include:

Matching the Group Situation with the Leadership Style

Altogether, the results of Fiedler’s studies can be best summarized by the following:

How the Contingency Model Can Be Applied Today

For the most part, Contingency Theory is relatively intuitive and Fiedler’s book does a great job of providing applications of his theory.

As a first example of applying Fiedler’s model, consider a basketball team, which has a structured task, a low level of power, and (in theory) good leader-member relations. Here, you would want a task-oriented coach to set the game plan rather than a relationship-oriented coach giving everyone an equal say.

As a second example, consider a commercial flight, which has a structured task, a powerful leader, and (in theory) good leader-member relations. Here, you want a task-oriented pilot to take charge; you don’t want a relationship-oriented leader discussing with the group how best to land the plane.

As a third example, consider a creative group with unstructured tasks, weak leader position power, and (in theory) good leader-member relations, like an ad agency. Here, you would want a relationship-oriented leader to get these creative minds to work together rather than a task-oriented leader trying to impose opinions and decisions on the group.

And as a fourth example, consider a squad of soldiers, which has an unstructured task, a powerful leader, and (in theory) good leader-member relations. Here, you would want a task-oriented leader to make decisions and get the group to their objective rather than a relationship-oriented leader who would waste precious time discussing options with the group. As stated in Fiedler’s book about the old army adage, “it is better in an emergency that the leader make a wrong decision than no decision at all.”

So, clearly, Fiedler’s Contingency Model is intuitively accurate and has countless applications across organizations.6

To recap, we covered:

These three parties are said to interact across three dimensions, including:

While more developments took place after Fiedler’s Contingency Model was published, principles of the model still apply today. As such, it is definitely a worthwhile theory to add to your management theory repertoire.