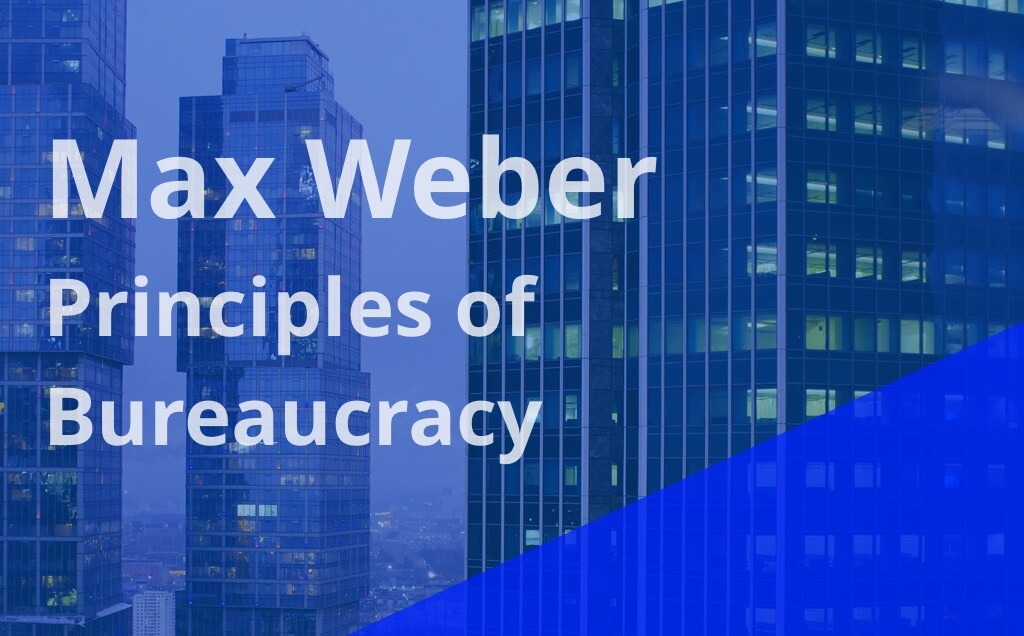 What are Max Weber’s six principles of bureaucracy?

This was not the case at the start of the 20th century. In fact, when sociologist Max Weber developed his management theories detailing the “characteristics of bureaucracy,” they were considered groundbreaking and novel among academics and business managers alike.1

In spite of modern distaste for the term, most businesses are still modeled on bureaucratic principles, and most large corporations display at least some characteristics of bureaucracy, as defined by Weber.

In this article, we’re going to discuss the Management Theory of Max Weber, including the following:

Who is Max Weber?

Maximilian Carl Emil Weber (1864-1920) was born in Erfurt, Prussia. After completing high school, Weber began studying law at the University of Heidelberg at age 18. Weber then completed one year of military service before continuing his studies and practicing as a lawyer. He eventually earned his doctoral degree in law at the University of Berlin in 1889 and began working as an economics professor.2

Weber’s most prominent works came after his retirement, including “The Protestant Ethic and the Spirit of Capitalism” in 1904 and “Economy and Society” posthumously in 1922. The management-related theories that he is well-known for came in the latter of the two publications and included his Theory of Bureaucracy and the Ideal Types of Political Leadership. For these and his other contributions, Weber is regarded as one of the founding fathers of the field of Sociology.

It’s worth mentioning that while other prominent figures in the development of management theory such as Henri Fayol and Elton Mayo are primarily known within business and commerce, Weber’s contributions were unusually wide-ranging. He’s commonly cited along with Karl Marx as a key figure in the founding of sociology as a discipline.3

What are Weber’s management theories?

We’ll take an in-depth look at each of these contributions to Management in the following sections.

The Theory of Bureaucracy

One of Weber’s greatest contributions to management theory was his Theory of Bureaucracy. This theory states that there are six principles of bureaucracy, including:

The six principles of bureaucracy

First, Weber stated that a bureaucracy has specialization.4 This includes:

When Weber spoke of formalized rules, he was speaking of what could now be described as policies and procedures. While his focus was primarily on the broad, exhaustive, and relatively stable rules that govern managers, the principle can also be applied to lower-level positions. The rules that are standardized and documented should detail the organizational structure, who is responsible for certain tasks, and how tasks are supposed to be performed. In large part, this is done so rules can be learned.5

Weber also stated that an organization should have a hierarchical structure, with one clear leader at the top. This structure should detail all of the managerial levels and which subordinate positions report to a given superior. Creating such a structure is beneficial top-down because it details who is responsible for supervising whom and bottom-up because it delineates who one should speak with if they’re looking to appeal any given decision.

Moreover, an organization should have well-trained employees. Weber states that managers should have thorough expert training, especially in the case of specialized positions, and that subordinate employees should also receive training.

Furthermore, Weber stated that a bureaucracy requires managerial dedication. Weber wrote that managers should be dedicating their “full working capacity” regardless of how long they will hold their position and always put official business ahead of other distractions.

Altogether, these six principles of bureaucracy make up the “ideal bureaucracy.” Note that the word “ideal” was not used to mean “optimal” or “best”; rather, “ideal” was meant to mean “most common” or “archetypal.” Thus, these are principles by which most bureaucracies operate.

Nonetheless, Weber thought that the bureaucratic organization had a “technical superiority over any other form of organization” during his time due to its “precision, speed, unambiguity, knowledge of the files, continuity, discretion, unity, strict subordination, reduction of friction, and of material and personal costs.”6

The Ideal Types of Political Leadership

Another notable contribution from Weber was his classification system of authority, which included:

Someone with traditional authority can maintain respect, compliance, and their position as long as people believe in the tradition and their commands fall within the aforementioned parameters.

Typically, leaders with traditional authority are determined based on:

When compared to an “ideal bureaucracy,” an organization dominated by traditional authority would have the following characteristics:

In order for someone with charismatic authority to maintain respect, compliance, and their position, they must continue to produce, most importantly to the benefit of their followers or “community.”

When compared to an “ideal bureaucracy,” an organization dominated by charismatic authority would have the following characteristics:

It is important to note that, according to Weber, charismatic authority is revolutionary and often displaces traditional authority. This happens through the following three-step process:

However, given the authority’s fluidity, charismatic authority is also likely to be displaced, eventually developing into a new traditional and/or rational-legal authority.

When compared to an “ideal bureaucracy,” an organization dominated by rational-legal authority would have the following characteristics:

Analysis of Weber’s Theories and Application to Today

Nowadays, words like “bureaucracy” and “authority” have a negative connotation.

When considering these words, and Weber’s work more broadly, one has to remember the time in which they came. In fact, as management concepts, these had a positive perspective and were relatively new, codifying how to optimally structure organizations (bureaucracy) and the main types of authority (political leadership).9

In reality, while we might dislike the word “bureaucracy” at this point in time, most businesses are still rightfully modeled in this fashion due to the concept’s structure, broad applicability, and effectiveness.

When you dive deep into the details of the Ideal Types of Political Leadership, you find another example where Weber was ahead of his time.

Potentially inadvertently, he describes the “organic structure” detailed in Contingency Theory when speaking of charismatic authority; that is, organizations under charismatic authority have inconsistent and unpredictable tasks and are thus less defined and more flexible in order to accommodate the conditions.10

This is exactly how businesses with ever-changing conditions operate today, including countless tech companies. And then, surely enough, they’re led by eccentric, “charismatic” figureheads, like Elon Musk, Steve Jobs, Mark Zuckerberg, and more.

So, the principles of Weber’s Theory of Bureaucracy still hold true to the organizations of today.

Likewise, the Ideal Types of Political Leadership relatively accurately describe the main structures of authority and the characteristics of organizations that follow.

While Max Weber is best known for his work in the field of Sociology, he clearly has also made noteworthy contributions to Management as a discipline. In summary of his contributions, we covered:

Although his theories are now somewhat dated, they were among the first of their kind. As such, they provided early descriptions of how organizations can create structure and produce efficiently and effectively, as well as how different styles of authority influence organizations.

Thus, Max Weber is, without doubt, one of the earliest and most important contributors to Management theory.