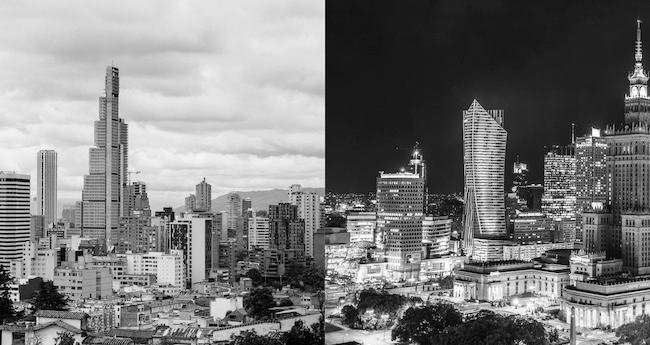 The US has a relatively small tech talent pool, and this resource gets exhausted pretty quickly.

When you need to tap into talent somewhere else, especially if you’re trying to save money, two of the top options are Latin America and Eastern Europe.

Having worked with top-level talent in both locations, I’ve become familiar with the pros and cons of each. Given that talent pricing and availability is similar in both regions, most companies can decide where to look based on time zone.

For the US, South America is a “nearshore” location that offers similar time zones to offices in San Francisco and New York. Brazil, Argentina, and Uruguay are the top examples in Latin America of nearshore locations that are only one time zone away from the US east coast.

EU businesses are usually better off working with Eastern European partners, given the proximity.

However, there are some differences between the regions when it comes to specific types of hiring and general work/life culture.

Brazil is going to be the most affordable, but the talent search here will be hit-or-miss. They’ve made a play to dominate a certain type of technology, sort of the way China plans to dominate Artificial Intelligence (AI). For Brazil, this is the Internet of Things (IoT).

Sixty percent of Brazilian companies have invested in IoT solutions in some form. Government estimates show IoT’s expected contribution to Brazil’s economy by 2025 to be $143B (that’s in USD). If you want a connected device solution, Brazil can supply that specific type of talent. Remember in your comparisons to think outside the concept of a “generic developer”. Often, it makes a lot of sense to go somewhere specifically for their experience in one unique subset of technology, even if you find them lacking in other areas.

On that note, Brazil has also invested heavily in AgTech. And they’re a top exporter of beef worldwide, which means lots of advancement in farming infrastructure.

IoT has made farms smarter in the technological sense of the word, and there are a lot of interesting solutions coming out of Brazil for the farming industry.

Argentina, on the other hand, is know for an abundance of talent focused around blockchain.

From the early 2000s up to now, they’ve turned their capital city of Buenos Aires into a real blockchain hotspot. $22,000–$30,000 USD is a normal range for junior development talent in Argentina.

While every agency in the world claims to do “blockchain solutions,” Argentina can actually back up their claim. They’ve really put in the time and effort to build a competent developer workforce who can leverage blockchain to create new industry solutions. In fact, they’re one of the first countries to use blockchain in an official capacity as part of their banking system.

Uruguay is what I consider to be the premium vendor of Latin America — however, talent there comes at a premium price relative to other locations in South America. Expect to pay $20,000–$35,000 USD annual salary for junior development talent in Uruguay.

They’ve got a significant developer pipeline of very creative, custom software developers, and the reason they’re so good is because of government investments into STEM education.

Their government policy “Laptops in Cribs”, along with the stringent educational requirements to become a certified developer in Uruguay, have taken their economy from agrarian to tech-focused and services-based in less than a generation.

Now, a substantial portion of Uruguay’s exports is in IT services. How substantial? It is the leading software exporter per capita in South America.

Additionally, you’ll find a high level of English spoken here, which eliminates one of the main fears people have about offshoring or nearshoring. Some cultural minutiae may pose a slight barrier, but their familiarity with English and with North American culture in general certainly does a lot to reduce this concern.

Keep in mind that developers describing themselves as “junior” in Uruguay usually have 6 years of computer science education in addition to a couple years working experience, so you’re getting a more technically educated resource than a US developer who just finished a 10-week coding bootcamp billing themselves a “junior developer” on the grounds of a 6-month internship.

In terms of software and IT services, Russia is the fastest-growing in the Eastern European block. You can expect to pay around $17,000–$28,000 annual salary for junior development talent, but it’ll vary by city with Moscow being the most expensive.

Skolkovo has been dubbed the “Silicon Valley of Russia” for its innovation in building a unique startup ecosystem.

Russia is well-known as a source for hard technical talent, and is an established leader on the cutting-edge of cybersecurity (both as service providers and “hackers”).

Poland has moved rapidly up the value chain away from pure hardware to creative, custom software development. I would even go so far as to say that Poland is to Eastern Europe as Uruguay is to Latin America in terms of the astounding talent that is on offer here from a relatively small country.

Naturally, this talent is a little pricier than its neighbors’, but it’s still lower than onshore rates in the US, UK, or France. Junior-level developers in Poland will run you around $23,000–$33,000 annual salary.

Ukraine is a really interesting one for staff augmentation, and the pricing is low enough that Polish companies commonly outsource their work here. You can expect to pay around $13,000–$26,000 USD annual salary for junior-level development talent.

I recommend this location for “order takers” and individual hires over agency contracts. If you’re looking for a programmer who is excellent at following a spec, the Ukraine has this type of talent in droves. As for creative agency or product work, that’s not really a good fit here due to the cultural and time zone barriers.

I consider Ukraine’s strong point to be as a development ‘shop’. In the development world you might come across studios, agencies, or shops. And when you hear the term “development shop”, you should be thinking, “reliable, functional.”

Romania is our honorable mention for UX and UI app design. The talent pool for design work in Romania is surprisingly robust.

When you’re developing an app for your company, of course you’re not only thinking of functionality. It needs to be aesthetically appealing to provide the desired experience for your end users. Romania has the talent for this. And as a bonus, English is widely-spoken.

When gauging pricing for offshore developers, you have to consider the gap between a junior level, early-career developer and a mid-to-senior level developer. The prices quoted above are in USD and based on rates for junior-mid-level employees or contractors.

Additionally, if you’re seeking someone from a major metropolitan area as opposed to a rural area, you’re probably going to get them through an IT staff augmentation agency.

By contrast, rural areas are better for finding individual developers. Also, consider the linguistic skills of your developer; this can also raise their price. For example: if they’re English-speaking, part of a company, and reside in a major metro area, all three of those factors will place them closer to the high end in terms of cost. But keep in mind that at the low end, you may need to invest in a good translator and/or project manager, which still comes with a price tag.

While the US has built a substantial cyber security framework, not every country is prepared to meet all of your cyber security needs. This is just one consideration to keep in mind alongside cost and time zone. Aside from the established cyber security protocols we’ve gone through in western EU and the US, these regions do lag a little. But one country from each region does it best.

Cyber security matters, because there’s no point in outsourcing to someone whom you can’t trust with your data. And it’s complicated, so you want to be sure you’re getting the best option. I’ve worked on projects in everything from robotics to healthcare, and I can tell you that there are vastly different data security regulations depending on what area of tech you’re in. A country that supports education and policy on cyber security is more likely to recognize those differences and be able to address any concerns that come with them.

A final note in regard to work culture; South America in general has a somewhat relaxed cultural approach to timelines and punctuality. They also tend to be more comfortable starting work later in the day — at my company, this means that work is conducted over a longer part of the day, with it being normal for employees to arrive around 9–10AM and work later into the evening around 7–8PM. Long lunches are normal as well.

Type-A personalities might have a better experience in Eastern Europe, where cultural norms around work/life balance are more aligned with the US. As always, your mileage may vary, and for many people (myself included), the Latin approach to work/life balance is not an issue.