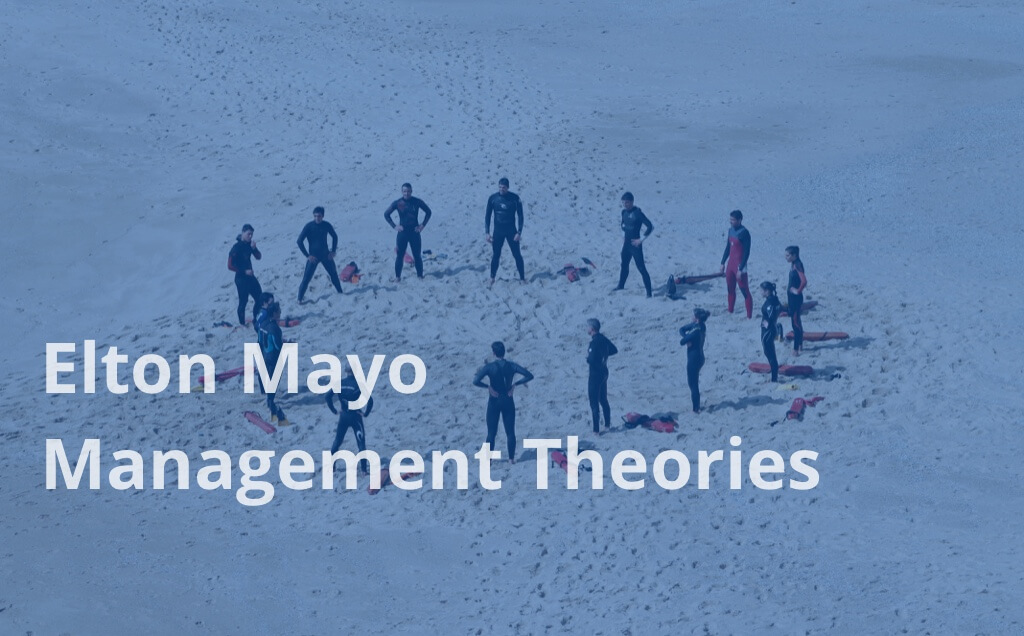 What is Elton Mayo known as the father of?

Elton Mayo is widely regarded as the “father of the human relations movement,” as well as the “father of HR” and “father of scientific management.” Mayo was involved in several scientific studies of organizational psychology in the early twentieth century, including the Philadelphia Spinning Mill Studies and the Hawthorne Experiments, which were influential in the development of corporate culture in the US.

Broadly speaking, Elton Mayo’s management theory promotes the hypothesis that workers are motivated by social and relational forces more than financial or environmental conditions.1 It holds that managers can increase productivity by treating employees as unique individuals rather than interchangeable cogs in a machine.2

Many of the theories associated with or popularized by Elton Mayo — broadly known as Human Relations theories — are still applicable today.

In fact, they have seen renewed popularity with large tech companies like Cisco and Google, as “humane” and individual-centered workplace environments have overtaken rigid, industrial corporate hierarchies in popularity.

Elton Mayo’s work has also influenced more modern and Machiavellian management theories, such as the Gervais Principle, which holds that subordinates can be placated with relational perks (peer approval, staff parties and gift certificates) just as effectively as with financial rewards (bonuses, profit-shares).

In this article, I’ll be covering:

Who is Elton Mayo?

George Elton Mayo (1880-1949), born in Adelaide, Australia, is best known for his contributions to the Human Relations Movement during his time as a Professor of Industrial Relations at Harvard Business School. Prior to Harvard, he also spent time as:

Mayo was unique in his time, using a science-based approach that incorporated multiple disciplines, including anthropology, psychology, and physiology. Elton Mayo’s contribution to Management Theory is best summarized in his belief that “unlocking the psyche of the worker is key to understanding industrial unrest at home and abroad.”

What are Mayo’s most famous studies?

While Elton Mayo performed a number of studies throughout his career, two Human Relations theories were particularly important to the field of Management:

After having studied shell shock, Mayo saw an analogy between the cause of “war neurosis” and the high level of industrial unrest in Australia. He argued that “the worker’s morale depended on his perception of the social function of his work” and issues could be resolved via effective industrial management.

Using the aforementioned analogy, he started making a series of changes to the department’s working conditions. In turn, these changes—introducing and modifying rest breaks in particular—produced incremental improvements to productivity and morale, eventually resulting in a turnover rate that matched the company’s average after only one year.

It was at this point in history when Mayo became world-famous. While it would later be determined that the rest breaks were only a partial contributor to the improvements, his discovery that improving working conditions could increase motivation and productivity marked the beginning of a major shift in Management Theory.

Having just seen it work in practice at the Philadelphia Spinning Mill, Mayo was given another opportunity to test his theory that improved working conditions will produce motivated and productive employees. This time, he was sought by Western Electric Company’s Hawthorne Works in Cicero, Illinois, to aid them in their goals to “inspire company loyalty, discourage high employee turnover and unionization, and present a good face to the public.”

These studies, known as the Hawthorne Experiments, began in 1924 with illumination tests that “set out to determine the effects of lighting on worker efficiency.” After those tests had been completed in 1927, new studies began, this time examining the impact of factors like rest periods and work hours on production levels. One study where five women assembled relays (electromagnetic switches for telephones) had positive results, but the researchers were unsure which changes to the working conditions — breaks, shorter working hours, incentives, group design, and increased attention — were producing those results. It was at that point in 1928 when Mayo and his colleagues, most notably Fritz Roethlisberger, were brought in to provide assistance.

A first group of discoveries Mayo had made revolved around what they had been brought in to determine: the cause of the relay assemblers’ increased productivity. Mayo determined that the productivity increased significantly over time because: 1. the individuals formed a cohesive and enthusiastic team; and 2. these group conditions increased both job satisfaction and cooperation with the experiment.

A second group of discoveries were found during interviews originally planned to gather details about employees’ life situations and their impact on attitudes towards work. After changing from a directed to a nondirected format, interviews grew from around 30 minutes to up to two hours, instead serving as an emotional release and an opportunity to gather substantial data on the attitudes of industrial workers during those times. From this data, Mayo and Roethlisberger discovered the importance of supportive and participative leadership, interpersonal relationships, and social cohesion in the workplace and used this knowledge to help develop some of the earliest attempts at personnel policies, supervisory training, and an employee counseling program.

A third group of discoveries came from the “Bank Wiring Room Study.” This time, a group with bad behaviors—like intentionally limiting production and ostracizing/hitting workers who were more productive—was studied in order to determine what was causing the behavior. From this study, Mayo determined that cliques form in organizations, enforce informal rules within them, and can work with or against management depending on its attitudes.

The Hawthorne studies ended in 1933, when the Depression hit and mass layoffs ensued, and it wasn’t until the 1950s and ‘60s that the knowledge would be recognized and adopted for its brilliance. Altogether, the studies demonstrated the importance and influence of Human Relations, including employee participation, job satisfaction, effective leadership, motivation, group norms, and resistance to change. While the studies had “flaws in both method and interpretation,” Mayo and his colleagues’ work “came closer to outlining an integrated theory of human behavior than any other perspective before them” and marked the beginning of the fields of Organizational Behavior and Organizational Psychology.

What are Mayo’s management theories?

The following are Elton Mayo’s management theories and related prescriptions that come from the Hawthorn and Philadelphia studies:

What about the “Hawthorne Effect”?

The “Hawthorne Effect” states that subjects of behavioral studies change their behavior if they know they’re being observed. While this realization came from the Hawthorne Experiments, in which Elton Mayo was involved, Fritz Roethlisberger and William Dickson were responsible for publishing the observation and its resulting lessons.

How do Mayo’s management theories apply to companies today?

Given that our current work environment is, at least in part, a product of Elton Mayo’s work, it’s difficult for us not to say that most of his findings seem “obvious.”

For example, I assume that the overwhelming majority of people would agree that problems in the workplace are primarily caused by human and social factors. Likewise, we all know about the effect of working conditions on attitudes and attitudes on individuals, groups, motivation, and performance. So, while his points are still correct, many have become comparatively obsolete due to the developments that came next.

That being said, since the human condition remains the same, many of his theories are still relevant today. In particular, we all know that interactions with supervisors and coworkers can cause stress and fatigue. This is still true no matter the industry or workplace. Moreover, the same can be said regarding: a) receiving attention from leaders; b) communication and cooperation’s impact on group cohesion; and c) the importance of recognition, involvement, and cooperation.

However, we also know that “managers account for at least 70% of variance in employee engagement3,” yet only 40% of workers feel they’re in “good jobs”4 with “high levels of satisfaction.” More specifically, only:

So, while it’s clear that these lessons are still relevant, it’s equally clear that we haven’t learned them. Conversely, to give this a more positive spin, this means that there are excellent opportunities for performance improvement and, in turn, organizational growth. Equally, it means that you, as a leader, can make a substantial impact if you put in the work!

Again, while it has been argued that his studies had methodological and ideological biases, it is clear to me that Management Theory, including the fields of Organizational Behavior and Organizational Psychology, is in great debt to Mayo’s Human Relations theories. In fact, I’d argue that we all owe him and his colleagues a great deal of gratitude for their influence on the improved working conditions that we experience today.