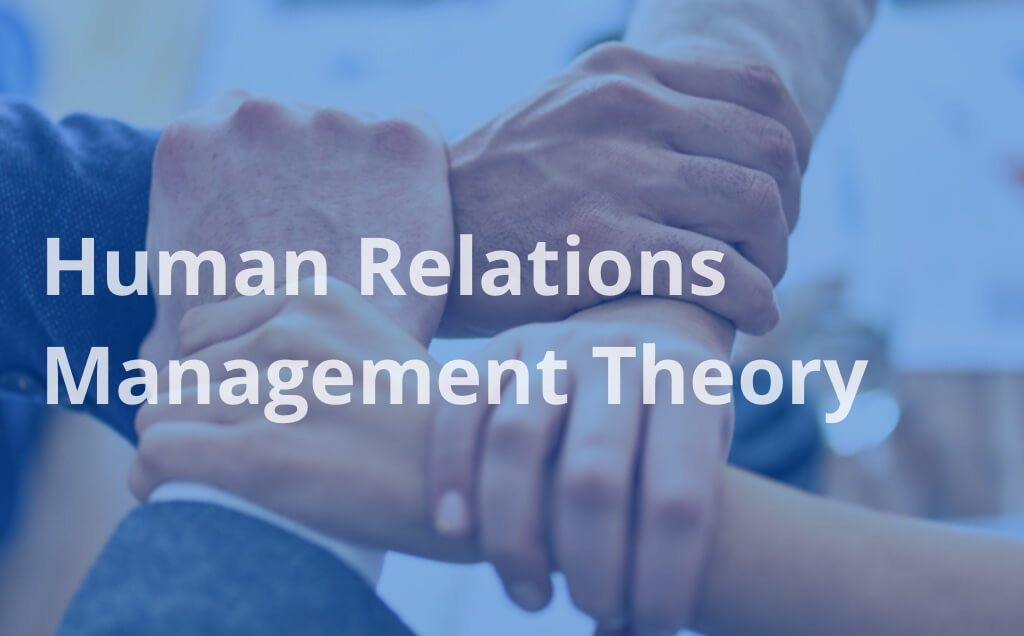 Human Relations management theory is a premise of organizational psychology from the early twentieth century, which suggests that employee productivity and motivation can be increased through positive social bonds in the workplace and acknowledgement of the worker as a unique individual. It holds that improved working conditions (empowerment, participation, positive treatment) lead to increased productivity.

If you’re getting educated on management and leadership theory, you can’t go long without hearing the term Human Relations Theory.

While some aspects of Human Relations Theory show their age since the 1920s, the overall impact of the school of thought is still cited as a source for the popularity of “startup” perks like on-site daycare and employee wellness programs.

Human Relations management theory originated between 1924 and 1932 during experiments conducted at the Hawthorne plant of the Western Electric Company in Cicero, Illinois.1

These studies were started by scholars from the Massachusetts Institute of Technology (MIT), but Elton Mayo and Fritz J. Roethlisberger of the Harvard Business School became involved in 1927 and eventually popularized the subject.

Around that time, Western Electric had begun to look for ways to “inspire company loyalty, discourage high employee turnover and unionization, and present a good face to the public.”2

In fact, the Hawthorne studies were the first to focus on the work life of employees. From then on, companies would have an interest in the applications of behavioral, social, and medical sciences to management and productivity, and scholars (like George Lombard, Paul Lawrence, and others) began to develop the field of Organizational Behavior.

What Are the Key Principles of Human Relations?

During the Hawthorne Experiments, researchers discovered that employee motivation is influenced by many factors.

These factors are categorized in a number of ways, but the simplest for understanding Human Relations is to do it by actor.

Using this method, you can see that four primary categories of actors influence employee motivation:

By understanding each actor category’s role in the process, an organization can put in place working conditions that optimize employee motivation and, in turn, productivity.

In each of the following sections, I’ll go over what was discovered about the category and the Human Relations principles that came as a result.

As we all know intuitively, a large portion of employee motivation comes from each person as an individual. Each individual’s motivation is influenced by their unique personality, experiences, capabilities, circumstance, thoughts, behaviors, and other factors.

As such, a key principle of Human Relations is for organizations to consider individual factors and how they can be influenced to increase motivation. This can include initiatives that look to change/improve an employee’s personal circumstance in and outside the workplace as well as their personal desires, perceptions, and attitudes.

Since individuals have social needs and interact together in the workplace, group factors must also play a role in employee motivation.

As discovered during the Hawthorne Experiments, cliques form and establish informal rules within the workplace, in turn exercising power and influence on the attitudes and behaviors of all the individuals involved.

Therefore, a key principle of Human Relations is that an organization must promote positive group values and relationships so that social pressure will produce teamwork and positive employee attitudes and behaviors.

If this can be done, results from the study indicate that group productivity will improve as desired.

In fact, the Hawthorne studies showed that “many worker behaviors, attitudes, and emotions have their genesis in their supervisor’s actions” and that “stress and fatigue can be the result of interactions with supervisors and coworkers.”

In particular, it became clear that an authoritarian leadership style was substantially less effective than a more democratic/participative approach.

As a result, another key principle of Human Relations is that an organization must ensure that managers and supervisors:

To the other extreme, if managers disagreed with company policies and/or become too closely allied with workers, they were found to limit production and sabotage performance.

Therefore, an organization must also ensure that managers and supervisors fulfill their roles and responsibilities as leaders and work in the best interests of their company as well.

As you may have noticed in the previous three categories, the organization is clearly at the center of Human Relations. This is because the organization houses and controls the underlying conditions for all of the aforementioned parties and interactions.

Thus, a key principle of Human Relations is that the organization must create working conditions that allow for/promote increased individual and group attitudes toward work. This includes the organization ensuring that:

As was discovered during the Hawthorne Experiments, if an organization can apply these key principles, then it can achieve the original goals of inspiring company loyalty, discouraging high employee turnover and unionization, and presenting a good face to the public.

The simplest way to determine which schools of thought have a relationship with Human Relations Theory is to examine the theory’s contemporaries.

In the next few sections, we’ll dig deep on the historical context of management theories that took root around Human Relations Theory:

Management Theory Prior to Human Relations

Just prior to Human Relations Theory, in the late 1800s to early 1900s, the management theories of Frederick Winslow Taylor, Max Weber, Henri Fayol, and others were most prominent. They all shared a similarity with Human Relations in that they were a departure from managerial norms in favor of improvement. That said, they did have their differences.

Taylor, who is known as the father of Scientific Management, used science to determine “the most effective and efficient way to accomplish a given task.” Instead of focusing on the performer of the task (i.e. the employee) as in Human Relations, this approach focused primarily on the task itself.

Weber, who is known as the father of Sociology, developed the Principles of the Ideal Bureaucracy, which provide justification of and rules for management decisions. This theory shared a focus on the individual with Human Relations, but approached things from a management and leadership perspective rather than a worker’s perspective.

Fayol, who is known for Fayolism or Administrative Theory, developed the 14 Principles of Management, which detail the responsibilities of managers. This theory considered human needs and relationships between parties in the workplace like Human Relations, but it focused primarily on administrative rather than psychological aspects.

As Human Relations Theory was gaining popularity, the management theories of Chester Barnard and Mary Parker Follett were gaining ground as well.

Barnard is best known for his work called “the zone of indifference.” This work examined what could make a worker disobey orders, thus focusing on the individual like Human Relations. Conversely, unlike Human Relations, his theory promoted logical rather than social or emotional influences on behavior.

Follett is best known for her work on conflict resolution. In particular, she showed that social concerns were important to employee relations and that integrative solutions were paramount. While her work differed by having a more Taylor-like foundation, her work also focused on social and emotional influences like Human Relations.

In What Ways Is Human Relations Theory Relevant Today?

Despite originating in the late 1920s, Human Relations principles are still very relevant.

First, since organizations are still made up of people, understanding how individual factors influence motivation is important. In addition to utilizing the psychology of motivation, caring for employees through internal and external benefits — like parental leave, onsite wellness and healthcare services, fitness centers, personal and professional development, and more at Google — is still effective at improving employee productivity (as many studies3 have shown).

Second, while the use of remote technology and groups continues to grow internationally4, producing in groups is still the norm in business. Thus, it is still true that organizations must foster positive group dynamics in order to produce teamwork and positive employee attitudes and behaviors.

Third, over time, it has become more and more apparent5 that effective leadership is critical to an organization’s success. This must be true given that managers across industries spend about 75% of their time in verbal interaction, most often with subordinates. Therefore, it is still important that an organization ensures managers and supervisors are equipped to support and motivate employees.

Finally, it is clear that organizations still must create working conditions that allow for/promote increased individual and group attitudes toward work. A great example of establishing positive individual and group working conditions is the work flexibility offered by Cisco. There, you can time swap 20% or 100% of your job on a temporary or permanent basis and work across various business groups within the company.

Through these and other types of initiatives, businesses are certain to have a more fulfilled workforce who will perform better and remain loyal to their company.

While there have been many developments in management theory since, Human Relations Theory is certainly still relevant today.

If you incorporate its principles into your organization and work as a leader, you’ll surely be rewarded with better workplace relationships and employee performance.