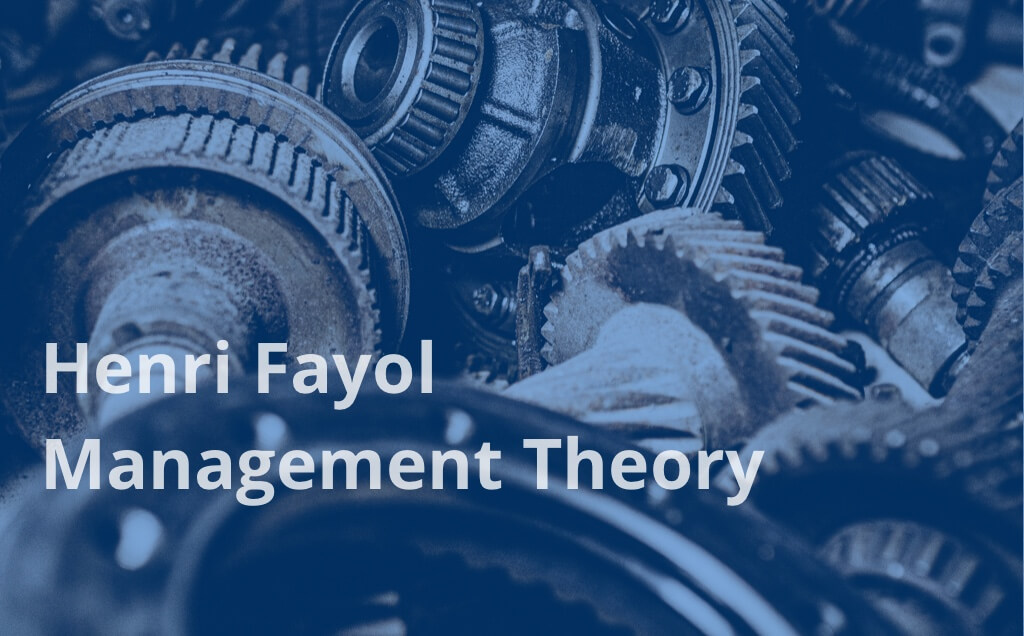 What are Henri Fayol’s five functions of management?

Henri Fayol is widely regarded as the father of modern management. His management theories, mostly developed and published in the early 1900s, were a major influence on the development of industrial management practice throughout the twentieth century.1

His ideas were developed independently of other popular management theories of the time, such as Human Relations or Elton Mayo’s scientific management theories — although they drew similar conclusions about the importance of worker wellbeing to productivity.

Fayol’s school of thought had a stronger emphasis on the role of management in an organization, when compared with its contemporaries in the field of organizational psychology. It’s associated with an “industrial” approach to business2, including cog-like repleaceable workers and a rigid hierarchy with strong top-level command.

Who is Henri Fayol?

Jules Henri Fayol (1841-1925) was born in Galata, Ottoman Empire, and raised in France. After graduating from mining academy L’École Nationale Supérieure des Mines, he worked as a mining engineer for Boigues Rambourg, eventually becoming Managing Director in 1888 and saving the company from bankruptcy. By 1900, under Fayol’s management, the firm became “one of the largest producers of iron and steel in France and regarded as a vital national industry.”3

He began garnering attention after publishing his theories in a 1908 paper, and his work culminated in the world-famous book, “Administration Industrielle et Générale” (“General and Industrial Management”).

As a result of this piece of work, Fayol became known for his Administrative Theory, also known as “Fayolism,” and as the father of Modern Management.

What are Fayol’s management theories?

I’ll provide the details about each of them in the sections below.

To begin his book, Henri Fayol states that there are six main industrial activities. The types of activities are:

While listing and distinguishing each of these categories wasn’t entirely a development in Management Theory, the separation of, focus on, and development of management as a distinct and important discipline absolutely was. Thus, this section of Fayol’s book was more concerned with demonstrating that management is unique and alluding to his groundbreaking work on The Five Functions of Management.

The Five Functions of Management

Fayol says that planning, also labelled as a “plan of action,” “is one of the most difficult and…important matters of every business and brings into play all departments and all functions, especially [management].” He states that planning is comprised of four components:

In order to create a plan, a manager must consider the firm’s tangible and intangible resources, work already in progress, trends, and future events. Features of a good plan are said to include: unity, continuity, flexibility, and specificity.

Organizing involves providing everything that is necessary to a plan of action—including physical and human resources—and its activities.

Command is described as getting “the optimum return from all employees of [a manager’s] unit in the interest of the whole concern.” This includes:

Coordination requires ensuring that all personnel understand their responsibilities and resources and activities across the organization work in harmony in order to achieve the desired goal.

And finally, control consists of “verifying whether everything occurs in conformity with the plan adopted, the instructions issued, and the principles established.”

Combined, Fayol’s Five Functions of Management marked a substantial development in the field of Management Theory, “is credited with the original planning-organizing-leading-controlling framework,” and remains a major management framework worldwide.

Henri Fayol believed that “the soundness and good working order of the body corporate depend on a certain number of conditions termed...principles, laws, [or] rules.” In turn, he produced 14 that are “flexible and capable of adaptation to every need,” but require “intelligence, experience, decision, and proportion.” Given that “without principles one is in darkness and chaos,” Fayol hoped that these principles could be relied upon and/or used for future study.

With the above in mind, the following describes each of the 14 components of Fayol’s administrative principles approach.

How do Fayol’s management theories apply to leaders today?

As mentioned earlier, since Henri Fayol’s Five Functions of Management remains a major management framework, it can still be used as it was originally written. That being said, the theory is descriptive, not prescriptive; it serves more as a scaffolding, general process, or reminder of duties rather than any sort of technique.

In any case, it includes a few gems that can be used as checklists, like the four components of planning (goal, action, stages, and methods). The same can be said about Fayol’s 14 Principles of Management.

Otherwise, on the subject of applicability, many people have argued that Fayol’s approach is cold and mechanistic. However, I’d argue the opposite, and especially so for his time. Throughout his work, one should note that he: considers multiple perspectives; recommends the empowerment of and “kindliness” and fairness towards personnel; and often prescribes flexibility in approaches.

Also, remember that he was talking about the broader subject of Management as opposed to the specific subject of Leadership; that is, I’d argue that Management tends to be less sympathetic, comparatively cold, and calculated, while Leadership is more sympathetic, warm, and considerate. Regardless, if you consider his work in its entirety and remember that it was translated from another language many years ago, I believe you’ll have a more favorable perspective.

So, altogether, Fayol’s management theories definitely still apply as-is and are excellent reminders of the duties that come with the Management function. If you haven’t read about them before, it might help to go through them again and consider things from your current position or the perspective of the subject of a case study. That way, you can get a better understanding of management as a function and the leader’s role within it.

As a result of his contributions to Administrative Theory, Henri Fayol is still regarded as one of the most important management thinkers of all time.

Clearly, this is well deserved as his theories have stood the test of time and influenced well-regarded developments since.

Therefore, Fayolism is a great subject of study and worth keeping around as management reference material.