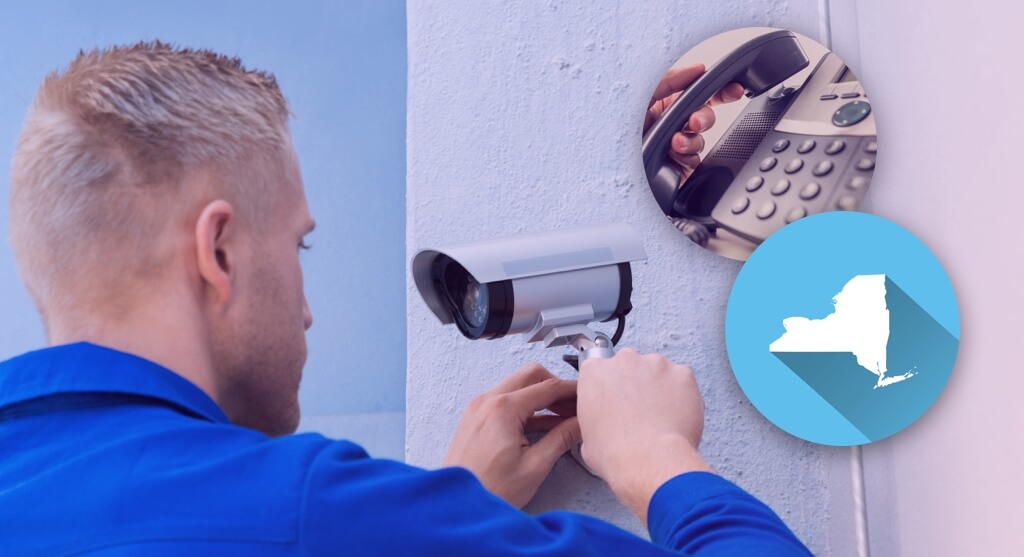 Recording audio and video in New York workplaces is legally permissible in most cases, since it is a one-party consent state. However, that doesn’t mean audio and video recording is always compliant — company policies often differ from state policies when it comes to workplace privacy within the state.

This article will delve into New York audio and video recording laws to guide you through how they apply at the workplace.

That’s not enough for you to understand how to implement them easily, so we will dissect each policy with example cases illustrating the most common situations arising in New York workplaces.

Mostly, audio and video recording at the New York workplace is legal. New York is a one-party consent state, meaning the recording is legal as long as one of the parties involved in the communication consents to the recording. If you are the person taping a conversation with someone else, it is obvious that you agree to the recording; hence it is legal. If the other person records you without your knowledge, their consent is enough for the legality of the shot.

However, it is not legal to record communication where the person who records is not involved as a party. For example, you must not wiretap a phone call between two other people who are unaware or consent to the recording. Since you are not a party to the conversation and no one consents to the recording, it is illegal to do so. That’s a felony that leads to up to four years of prison time and $5.000 in monetary fines.

The US federal recording laws take the same stance as the New York law. It allows everyone to record anyone without asking for permission — but only if they are part of the communication being recorded.

Generally, recording your conversations or activities with or without others is legal. Recording other people’s conversations you’re not part of is not.

There are two exceptions:

Regarding video recordings, Section 250.05 of the New York Labor Law is also very important. It prohibits eavesdropping at the workplace, which doesn’t prohibit video recording but does prohibit catching people’s conversations on the recording.

Section 250.45(c) further requires the employer to have legitimate reasons for recording, particularly for places where the employee could reasonably expect privacy.

Video Recording in New York Workplaces: Legal or Not?

As discussed above, video recording in the New York workplace is mostly legal. However, there are some nuances you need to be aware of to ensure that you don’t violate anyone’s privacy rights.

Can I Install a Video Surveillance Camera in a New York Workplace?

Yes, New York laws do not prevent you from installing surveillance cameras at your company’s premises for whatever reason. New York is a single-party consent state, meaning you don’t need employees’ consent to monitor the workplace on video. All you need to do is give them a notice about the monitoring.

The takeaway is that you can install surveillance cameras at work to monitor employees, but you must not record audio with the cameras.

Can I Refuse to Work Under Surveillance Cameras in NY?

Employees cannot refuse to work under surveillance cameras in New York. They must simply accept that it is part of the work position.

The employer has the right to install video cameras to monitor the workplace for various reasons, including employee performance. There is nothing to be done to oppose that.

Employees receive a notice from employers for being recorded, but the notification cannot be refused. It is just a notification, not a request for permission to be recorded.

Can I Prohibit Video Recording at My Company’s Premises?

You can impose recording policies for certain purposes. That may allow you to take action against a worker, including firing them, if they record audio or video at work for such a purpose. However, you cannot limit recordings for all purposes. The limitations must not be broad.

Again, New York is a single-party consent state. The US federal laws require consent from one party only, so if someone decides to record someone else, there is nothing to be done to prevent that.

Can I Record My Boss on Video?

You can record or boss, or any colleague, on video as long as you are part of the video. Unlike your employer, who can monitor what is happening in their company, you must not install recording devices to record videos you are not part of. The video shot would be legal only if you are part of it because consent from at least one party is necessary.

If you want to capture harassment or discrimination against you in the workplace, you are free to do so. Obviously, you’ll be part of that conversation; therefore, your consent for the recording is sufficient for the legality of the video. The video would be admissible in court, although it is uncertain if you can rely on it as evidence due to the hearsay rules.

There are two possible scenarios:

Audio Recording at New York Workplace: Legal or Not?

Audio recordings in New York have somewhat the same treatment as video recordings. However, audio recording occurs in a different setting, so that we will apply New York recording laws to such situations separately.

If the other party participates in the conversation, the answer is that you cannot prevent them from recording. Your boss or colleagues are not obliged to seek your approval to record you as long they participate in the communication.

You can decline to be recorded on audio by surveillance cameras, however. As discussed above, surveillance cameras can monitor people on video but must not eavesdrop on their conversations. However, it is highly unlikely that your employer will ask for your consent before turning the volume on the cameras, which leads us to the next question.

If your conversations have been recorded on audio by someone who has not been a part of it, that person has committed a felony. The audio recording made by video surveillance cameras at the workplace is also illegal. Remember that such cameras must not capture audio.

However, anyone can press the record button and record audio of their conversations with other people. It is allowed in New York. In such cases, your consent is not required, and nothing is to be done about that.

Following a few simple audio and video recording rules will keep you safe from legal trouble in New York. Surveillance cameras are legal as long as they don’t capture audio. Recording harassment at work is also legal in most cases.

As in any other one-party consent state, the only significant constraint is the absolute ban on recording private spaces such as bathrooms.

Can I record phone calls with my boss in New York?

New York is a one-party consent state, meaning that it is permitted to record phone calls between two people in most cases; this includes phone calls between an employee and employer. However, this can run against company policies, and can conflict with state policies in cases where one person is out of the state, on an interstate highway, or if multiple people are on the call.

Recording phone calls with your employees is usually permitted by New York state provided that you are part of the phone call, and only two people are on the call. On the other hand, you must not record phone calls of your employees where you are not part of the conversation unless they consent to it. That’s a conversation between two people who do not consent to the recording, and at least one consent is required by New York, as a one-party consent state.