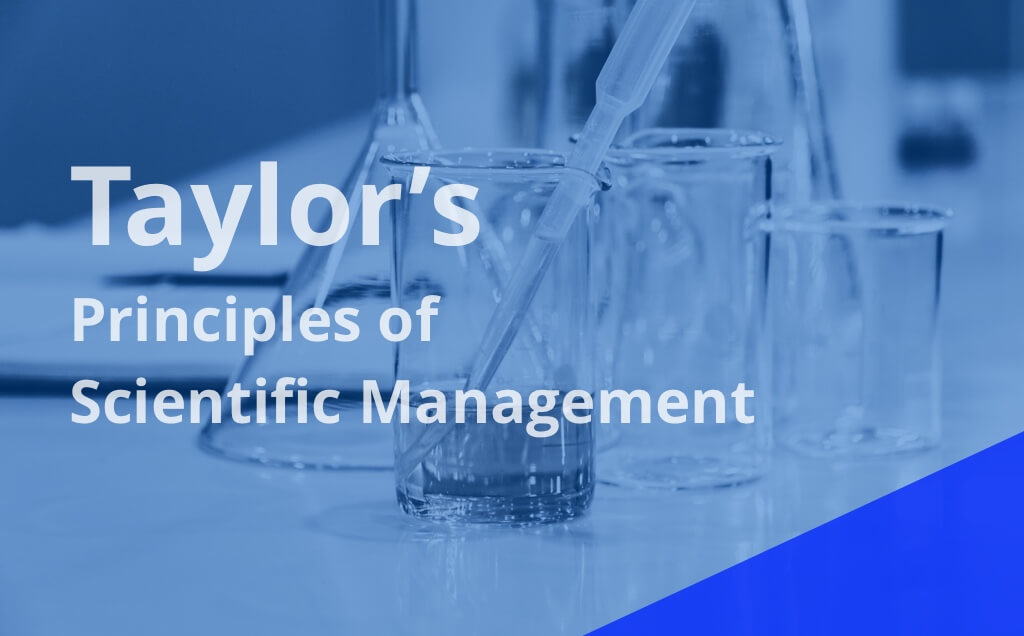 What are Frederick Taylor’s four principles of Scientific Management?

While often misunderstood in his time, Taylor’s work plays a key role in modern understanding of worker-management relations.

Who is Frederick Taylor?

As a teenager, Taylor spent time studying and traveling in Europe and enrolled in Phillips Exeter Academy in New Hampshire in 1872.

After graduating, he was accepted into Harvard Law School but was unable to attend due to poor eyesight.

Then, instead of going to university at that point, Taylor filled various manufacturing-related roles, eventually earned a mechanical engineering degree from Stevens Institute of Technology in 1883, and became Chief Engineer at Midvale Steel Works in Philadelphia.

After resigning in 1890, he became General Manager of Manufacturing Investment Company, but left the company in 1893 to develop the profession of engineering management consulting. From 1906 to 1907, Taylor was the President of the American Society of Mechanical Engineers and later became a professor at the Tuck School of Business at Dartmouth College.

Taylor is best known for his 1911 book, “Principles of Scientific Management.” In this book, he presented numerous principles of management that were based on the scientific method and could improve the efficiency and productivity of industrial workplaces.1

Due to this work, Taylor is known as the father of Scientific Management, which is also known as “Taylorism.”2

The Philosophy Behind Scientific Management

In saying this, he meant that the organization and employees should work together, strive to get the most out of one another, and be compensated for their efforts as it’s in everyone’s best interests.

For workers in particular, taking this approach would mean that they could benefit from higher wages, shorter working hours, and better work and home conditions.

Taylor believed that the worker should be focused on labor, due to insufficient capacity and/or education, while managers should be focused on and held accountable for optimizing performance. Regarding their interaction, Taylor said that workers should be taught daily and “receive the most friendly help from those who are over [them], instead of being…driven or coerced [by bosses or left to their] own unaided devices.”

In fact, Taylor believed that training and development was “the most important object of both the workmen and the management” in order to produce maximum efficiency and that a “close, intimate, personal cooperation between the management and the [worker] is of the essence of modern scientific or task management.”

So, while Taylor’s Theory of Scientific Management has often been painted as cold and impersonal, it isn’t really the case; Taylor’s philosophy had good intentions for everyone and problems come from poor application. Specifically, Taylor stated that poor application came from:

The Principles of Scientific Management Theory

In the early 1900s, the most common approach to management involved offering incentive-based pay in order to promote initiative (labeled “initiative and incentive”).

This was described as workers giving “their best initiative and in return [receiving] some special incentive from their employers.”

Instead, Taylor argued that getting initiative out of workers is rare and a better approach would be to apply the scientific method in order to increase efficiency and performance.

Through his studies that used the scientific method, Taylor established Four Principles of Management, including to:

In summary, Frederick Taylor’s four principles of Scientific Management are:

In his own words, these are:

Each of these principles will be described in the sections that follow.4

Principle One: Develop a Science for each element of work

To begin, it is important to note that Taylor was not attempting to determine and force upon workers “the maximum work that a man could do on a short spurt or for a few days.”

Rather, in “developing a science,” he wanted to know “the best day’s work that a [person] could properly do, year in and year out, and still thrive.”

Thus, Taylor had a focus on long-term productivity, considering both the organization’s and the workers’ perspectives.

With this focus in mind, when Taylor spoke of “developing a science” for each element of work, he essentially meant that management should:

In order to gather objective data on work, Taylor would select “first-class laborers” to perform a given task, pay them extra wages, and carefully examine and test them to ensure that they were working “to the best of their ability at all times.” That way, optimal productivity could accurately be determined.

Next, these workers would be observed while performing various procedures and timed, using a stop-watch, in order to determine how much time was taken for each motion.

Given the “science” of the task, Taylor then said that individuals “especially suited” for the work should be selected. In his example of a pig-iron handler, he found that approximately only one in eight current workers were capable of meeting the newly established standards. That being said, he also determined that there were plenty of other internal and external candidates that would be capable of fulfilling the role. Thus, combined, it was clear to him that selection and correct assignment were critical to the theory of Scientific Management.

Regarding training and development, if a worker was performing below standard, Taylor believed that a “competent teacher should be sent to show [the worker] exactly how [their] work can be best done, to guide, help, and encourage [them]…[and give them] the time and the help required to make [them] proficient at [their] present job.”

However, if after studying the worker it was found that they would be unable to perform according to standards, the worker should then be “shifted to another class of work for which [they are] either mentally or physically better suited.” Therefore, training and development were also important and inextricably connected to selection and assignment.

Otherwise, it is important to note that Taylor recommended gradual implementation of a new science to a job. This is because it requires a “change in the mental attitude of the [worker]” and “it is impossible to hurry it beyond a certain speed.”

In particular, he believed that “only one [worker] at a time should be dealt with…until this single [worker] has been thoroughly convinced that a great gain has come to [them] from the new method.” Then, after “one-fourth to one-third of the [workers]…have been changed from the old to the new, very rapid progress can be made, because at about this time there is…a complete revolution in the public opinion…[about] the new plan.”

Principle Three: Cooperate with the Worker

When speaking about the Bethlehem Steel Company, Taylor said that work should be distributed among four parties and in the following fashion:

By distributing work in this fashion, each worker:

This is what Taylor “referred to as cooperation between the management and the [workers].”

According to Taylor, the “initiative and incentive” approach required workers to “bear almost the entire responsibility for the general plan,” “each detail of…work,” and “the actual physical labor.”

In contrast, he argued that Scientific Management was more effective because “even if the [worker] was well suited to the development and use of scientific data, it would be physically impossible for [them] to work at [their] machine and at a desk at the same time.”

Moreover, “in most cases one type of man is needed to plan ahead and an entirely different type to execute the work.”

Thus, Taylor argued that the best approach would be “an almost equal division of the responsibility and the work between the management the [worker].”

When discussing his bricklaying study, Taylor said that management’s responsibility was to ensure cooperation between all of the aforementioned parties. This included ensuring that workers were provided the correct tools, operating under the right conditions and according to the correct procedures, and informed of their pace and progress.

Simultaneously, Taylor said that management should also be “side by side with the [workers], helping, encouraging, and smoothing a way for them.” Therefore, management was responsible for enforcement of methods, adoption, and cooperation, while workers received extra pay for performance.

Finally, when rewarding workers, Taylor stated that it “must come soon after the work has been done.” This was because he found that workers would lose motivation if rewards came too far in the future. From his bicycle ball study, he determined that communication of performance and rewards should come daily and encouragement through personal attention “as often as once an hour.”

Thus, in addition to being the father of Scientific Management, Taylor was also ahead of his contemporaries in his understanding of reward-related motivation.

As you’ve discovered, Taylor’s contributions were largely misunderstood and ahead of their time.

While he may not have been tactful in his writings, as was discussed, his intentions were good. Not only did he seek “maximum prosperity” for the organization and the worker, but also the consumer and entire “civilized world.” He desired: “Science, not rule of thumb. Harmony, not discord. Cooperation, not individualism. Maximum output, in place of restricted output. [And] the development of each [person] to [their] greatest efficiency and prosperity.”

And through his methods, he helped us move towards these goals, achieving improvements in working conditions, productivity, and profitability beyond expectations.

In fact, in some cases, he even achieved productivity improvements of up to nine times the norm!

Thus, it is clear that knowledge of Frederick Taylor and his Theory of Scientific Management is essential to all managers and students of management.